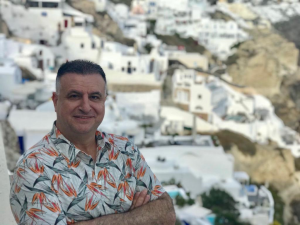 During his undergraduate studies, Rajai served the Lord among his colleges at the University. Then he started a weekly meeting on campus and planted a Church near the campus (Assemblies of God Church-Irbid)

After Graduating from Yarmouk university in Jordan, Rajai Joined Campus Crusade for Christ (Cru) in 1992 and worked with the JESUS Film. He then started the campus ministry in the universities in the North of Jordan then led the Campus ministry of Cru in Jordan. Also, Rajai was overseeing the Campus ministries of Cru in the Middle East and the Arabian Peninsula from 1996-2001.

During the years 1998 and 2003, Rajai was involved in Radio production that reached thousand of Muslim college students throughout the Middle East, North Africa and the Gulf peninsula and produced other radio programs that reached hundreds of thousands of people all over the Middle East.

In 2001 Rajai met Samar, who is originally from Nazareth-Israel, and got married the same year. After they married, they lived in Jordan for 2 years and bore a beautiful child named Farah. The Lord called them to move to Israel and help restore the Land our Lord chose to come to, 2000 years ago by bringing the Gospel back to where it originally began. In October 2003 the family moved to Israel.

Between 2003-2010, Rajai worked with Cru in Israel helping the campus ministry. He then was asked to lead the Church movement ministry within Cru that involved mass evangelism, training leaders and Church planting. Rajai directed hundreds of evangelistic outreaches and events and helped distributing over half a million bibles, Jesus film DVD’s and other literature. During that time, Rajai and his wife planted their Church in Upper Nazareth in Israel.

Rajai was involved also in training Pastors, Church leaders and youth leaders on the subject of Evangelism and outreach for Muslims in addition to teaching the subject in seminaries.

The vision of Back to Jerusalem was born several years ago, with the attempt to empower the local church to do evangelism and discipleship and to encourage the global body of Christ to come and to help bring the gospel back to where it started from. Through Evangelism such as big events, distribution of literature, Medical outreaches, sports and music outreaches, community service and more. Also the ministry does lots training and equipping the Pastors and leaders in many areas of ministry and discipleship. Also, the ministry focuses on Church planting.

In 2013, Rajai and the Back to Jerusalem team began to work extensively among the refugees from Iraq and Syria in the countries of Jordan, Iraq, Turkey and parts of Europe. The ministry started a refugee’s center in Jordan that serves hundreds of refugee families every month. In addition to that, BTJ helps planting a Church in Istanbul, Turkey among the Kurdish refugees as well.

In 2011, Rajai Started a tour agency called Living Stones Tour Service, that is affiliated with Back to Jerusalem ministry. It’s purpose is to expose and connect western Evangelical Christians to the local believers in Israel, the “living stones” through Holy Land tours organized by the company, and support the ministry financially. You can find it here www.livingstones.co. In addition to being the pastor of the Upper Nazareth Baptist Church, Rajai has headed the Synod of the Evangelical Churches in Israel since September 2014.